This morning we met with Tim, head of the head of the Spokane Tribal Fish Hatchery (there were three Tim’s on this project, a creek graduate, head of GRID Tribal programs, and head of the Spokane Tribal Fish Hatchery). Tim graciously gave us a tour of the hatchery and began with describing his own childhood on the reservation, frequenting fishing ponds and searching for the perfect creek spots. His own grandparents lived in the area where the hatchery now stands, and Tim pointed out a small metal pipe sticking out amongst the water lilies in the pond next to the hatchery that his grandparents used to get drinking water from. The Spokane Tribal Fish Hatchery is a powerful symbol of reclaiming sovereignty on the land. In the words of the Spokane Tribe of Indians website “The hatchery was developed and constructed as partial mitigation for the loss of salmon, steelhead and habitat caused by hydroelectric power development on the Columbia River, namely Grand Coulee Dam. Partial mitigation is emphasized because there is no way to compensate the proposed extermination of the salmon the Tribe once utilized for subsistent and cultural purposes. Nevertheless, the hatchery is a key element of a comprehensive restoration and enhancement program for the Lake Roosevelt and Banks Lake fisheries, the two water bodies/reservoirs created by Grand Coulee Dam. Other components of this program include the Lake Roosevelt Monitoring Program also managed by the Spokane Tribe, the Sherman Creek Hatchery managed by the Washington Department of Fish and Wildlife, the Rainbow Habitat Improvement Program managed by the Colville Confederated Tribes and the Lake Roosevelt Net Pen Program managed by the Lake Roosevelt Development Association. Goals and objectives of each project are coordinated between the respective management agencies. Each project receives their funding from the Bonneville Power Administration through direction by the Northwest Power Planning Councils Columbia Basin Fish and Wildlife Program.”  The fishery is run by and employs almost exclusively Spokane tribe members. “The primary objective is to produce kokanee salmon and rainbow trout to create and sustain harvestable fisheries in this project area that includes waters within the boundaries of the Spokane Indian Reservation. To accomplish this, the hatchery produces up to 4.3 million kokanee salmon and 750,000 rainbow trout annually for release. The fish are released after the reservoir draw down period, approximately mid-May to June, to help alleviate the loss of fish by entrainment (flushing) through Grand Coulee Dam. Additionally, the hatchery raises up to 10,000 rainbow trout and 2,000 kokanee salmon, all catchable size, for reservation inland lakes. This includes 200 – 300 lunkers (up to 10 lbs ea.) raised for the spring and fall fishing derbies on McCoys and Turtle Lakes.” 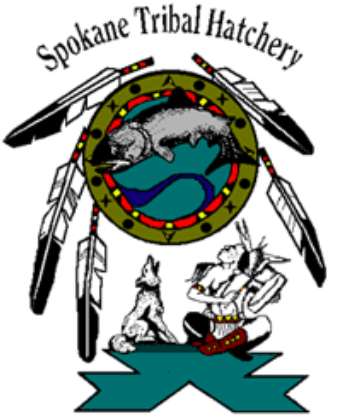 As the Spokane tribe historically was deeply tied to the salmon runs of the area, which have since been eliminated by hydroelectric dams, installing solar on the tribal hatchery with the eventual goal of eliminating the need for the hydroelectric dam which necessitated the establishment of the hatchery in the first place was a very potent realization for our team. We were extremely moved by the determination of Tim and the hatchery and the connection between residents and the land he vocalized. His son stopped by as well who is a speaker and teacher of the traditional Spokane Indian language, a Salish dialect. While much of Tim’s generation were not raised with exposure of teaching of the Salish language, many individuals are now reviving the language. We met a group of 5 year olds before lunch who were taking part in a Salish immersion summer school. Their teachers were kind enough to share and translate a traditional oral origin story with us as we all sat in the grassy pagoda area. Inside the hatchery itself were long tubs of thousands fry/fingerlings of various fish species to be released into the local watershed. Pumps ensured water circulation and outside, a waste pond will be used for agricultural fertilizer.

For lunch we drove into the reservation town center and had fry bread burgers and pbj’s.

The afternoon was a surprisingly quick finish of laying the remaining panels on both sides of the roof! While we did that, GRID staff and a local electrician, began to set up the next house for solar. We had not anticipated getting this first home done so quickly, but are excited to start the process for this next house over again. We are learning quickly and thoroughly. All of the GRID staff are very patient in teaching us and empowering us to be able to then take the knowledge to practice and do parts of the installation process on our own. That’s not to say that mistakes weren’t made, but overall we learned a lot in a safe environment. 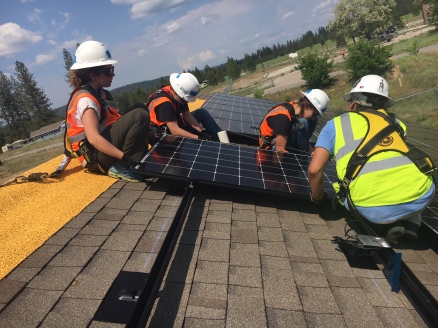 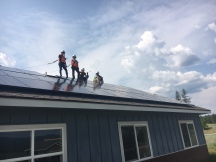 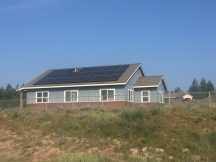 The afternoon consisted mostly of “slapping glass”, a motto we all repeated as we hoisted the panels up to the roof. Moving the panels took up the rest of the day. All the time we were either moving them from the storage shed to the base of the roof using a forklift or using rope and carabiners to gently lift them, one at a time, onto the roof. It was very tricky to move over wires and racking to safely place the solar panels in their correct spot. It was also pretty challenging to find the correct wires that neatly connect to the panels without letting them touch the roof or be crimped by the panel itself. I will never forget how silly I felt, my head laying on the roof, looking underneath a panel and feeling my way to the wires, making sure they were in the correct spots. Overall, another great day on the Spokane Tribe!

View of the team atop the fish hatchery 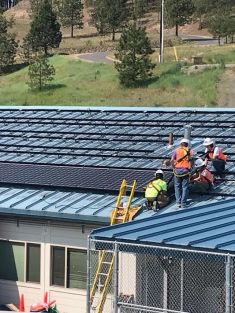