Solar Panels to the Roof!

A few of us woke up early for the sunrise gleaming over the lake we’re camping by, and it was breathtaking. The lake was calm and clouds bright pink. The clouds blew in and rained and rained, so the day started a little later than anticipated.

We got to Conquering Bear’s house around nine but lightning kept us from working on the roof at first so we tested and recorded the open circuit voltage (VOC) of each solar panel to ensure the whole system would be generating as much electricity as possible once installed.

Eventually we got up onto the roof around 11am. We worked in two teams on different sections in the house. Boyce, Nick (Solar Corps), Lina, and I installed nine solar panels onto the East side of the house and four on the West side. Which was pretty easy once you got the hang of it. A little muscle heaved the panels from the ground onto the roof and Lina and I helped straighten them out and bolt them in place. On the West side, the rest of the roof team worked on getting the rails up for more panels to sit on. After lunch we regrouped to work on running conduit (for the wires) from the different junction boxes (from the panels) to combine them into one box. Tomorrow we have to attach eight solar panels (on the West side) and fish the wires through the conduit. Other than that we nearly done! 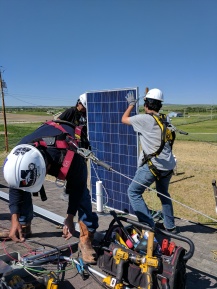 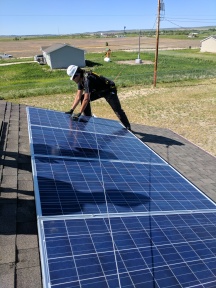